Stowmarket Chorale aspires to make the joy of great choral music accessible to all in East Anglia, enriching the lives of our singers and community.

Stowmarket Chorale, formed in 1901, is an ambitious choir which rehearses in Stowmarket, on Wednesday evenings between September and July; we usually give three concerts a year. We have been meeting by Zoom during the pandemic on the same evening for singing and social meetings. Anyone who wishes to join us as we begin to meet again in person should contact our membership secretary by clicking on ‘How to join’ above. 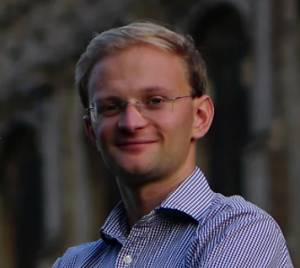 Known for his ‘passionate, insightful, and inspiring conducting’, Benedict Collins Rice has performed throughout Europe and America (from The Royal Albert Hall to Carnegie Hall);  recorded for several record labels, for BBC and NBC Television, the BFI, and broadcast live on Radio 3.

Benedict is founder and artistic director of The Facade Ensemble – a dynamic collective of young professionals specialising in 20th century chamber music whose performances are noted for their ‘liberal seasoning of vivacity and wit’.

Benedict follows in the footsteps of Holst and Tippett in holding the post of Lecturer & Choir Tutor at Morley College. He conducts the West Kent County Youth Orchestra, Ipswich Chamber Choir, Moving Chamber Choir, Stowmarket Chorale and is in demand as a guest conductor. Recent highlights include working with the Berlin Sinfonietta, assisting with the BBC Concert Orchestra, and conducting the Southbank Sinfonia and British Youth Opera directed by Keith Warner.

He is also committed to music education and teaches at the London Youth Conservatoire and was Director of Choral Music at Tonbridge Grammar School for several years.

William Baldry has been working with Stowmarket Chorale since 2014. He is also Organist and Assistant Director of Music at St Mary-le-Tower, Ipswich, Assistant Music Director with Ipswich Chamber Choir and a busy freelance accompanist. As an organist, William has performed live on BBC Radio 3, appeared on BBC 1’s Songs of Praise, and has toured extensively to the USA and Europe with numerous choirs. He has previously held posts at Rochester Cathedral and Tewkesbury Abbey.

We are delighted to have Terry Waite as our President: he has attended a number of our concerts and we have a long-standing and warm relationship with him, together with our two supportive Vice Presidents, Graham Bishop-Hunt and Dorothy Fisher.

BBC News: Terry Waite: ‘I don’t know how I survived captivity, but I did’

On the 18th of June 2022, we will be singing Verdi’s Requiem. New members are most welcome! 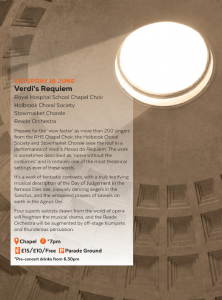 We pride ourselves on offering a friendly welcome to new members. If you’d like to come along to a couple of free rehearsals to see if Stowmarket Chorale is the choir for you, contact Adrienne, who will be pleased to hear from you: membership {-at-} stowmarketchorale.org.uk 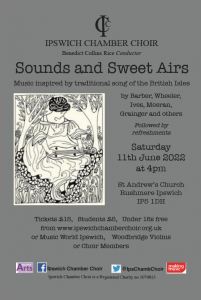 Stowmarket Chorale has received a grant from Stowmarket Town Council to help fund its activities. For more information, see https://stowmarkettowncouncil.gov.uk/stowmarket-town-council-award-over-10000-in-grants/

Stowmarket Chorale2 months ago
The East Anglian Daily Times published an article about our concert this Saturday at the URC, featuring Rosemary and Ann who took to the streets dressed as suffragettes.